UK ZION, a group of volunteers from the
World Mission Society Church of God received
the Queen’s Award on 2 June, 2016.

It is more meaningful as it is another best group award
from the head of a country after the U.S. President’s Volunteer Service Award
and the Korean Presidential Group Citation.

The Queen’s Award is to recognize an outstanding contribution to the U.K.

It is the most prestigious award for a group in the U.K. that lays stress on honor. It is also acknowledged in 53 member states of the Commonwealth that were previously under the rule of the British Empire, which was called “the empire on which the sun never sets” where 2.2 billion people reside.

It was created to celebrate the 50th anniversary of the Queen Elizabeth II’s coronation. There are the Queen’s Award for Voluntary Service and the Queen’s Awards for Enterprise that are given annually.

Groups must have been benefiting local communities with a minimum of three years of continued volunteer services. Through thorough and rigorous assessment for several years, and after the Queen’s formal approval, the award is given to groups that receive support and respect from residents.

The Queen’s Award for Voluntary Service recipients are made the Member of the Most Excellent Order of the British Empire [MBE]. Just like individuals, groups that were recognized with an MBE can use this British honor with their names. They are also entitled to use the Queen’s Award emblem on their website, stationery, and other printed material. Each successful group is invited to the annual royal garden party.

The Queen praises UK Zion, a volunteer group
from the World Mission Society Church of God
for performing the role of the salt and light

“UK ZION, a group of volunteers from the World Mission Society Church of God, share Mother’s love through a range of initiatives. We being cognisant of the said group’s outstanding voluntary work in the community, and being desirous of showing Our Royal Favour do hereby confer upon it.”

Pastor Kim Joo-cheol (left) received the award certificate signed by the Queen and the commemorative crystal of the Queen’s Award from the Lord Lieutenant of Greater Manchester, Warren Smith (second from left).
Ceremony held in Gorton Monastery

“Giving something back to their community, the group (Church of God) of mainly young volunteers have transformed lives in this city and much further afield as well as encouraging young people to participate in helping their society and spreading community spirit. For the amount of work and the time and effort they have put in, they are very much worthy to receive this prestigious award. They simply engender happiness.”

“It doesn’t go unnoticed in the great community of Greater Manchester of all the excellent work they have done—the actual feats of community, togetherness bringing the community together on the streets, street cleaning community groups and the voluntary work that they do. So this award really is a culmination of an amazing amount of work a lot of volunteers have done over many years.”

Procedure for Assessment
and Selection

The Church of God carried out volunteer services constantly for four years in the U.K. and it was decided as a winner through rigorous procedure for assessment for three years and the Queen’s approval.

During this period, the County Assessment Panel visited the Church of God several times and examined the church from all angles, not to speak of the church’s volunteer activities. The examiners visited the church without notice, made phone calls, visited the places where the church carried out volunteer services, and contacted beneficiaries to confirm its activities’ veracity and sincerity.

2
A Specialist Assessment Panel of independent volunteering experts from across the U.K. judge nominated groups against the Award criteria, taking into account the first appraisal.

3
The panel passes its recommendations to the Main Award Committee.

4
The Main Award Committee advise the Cabinet Office and the Minister for Civil Society.

5
Finally, the award is decided after the Queen has given her formal approval.

10 Awards
from Greater Manchester in the U.K. 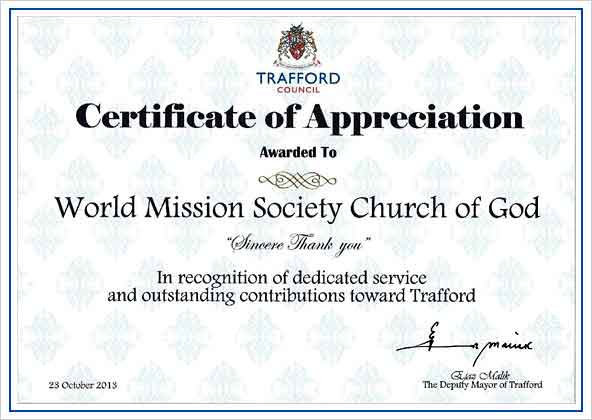 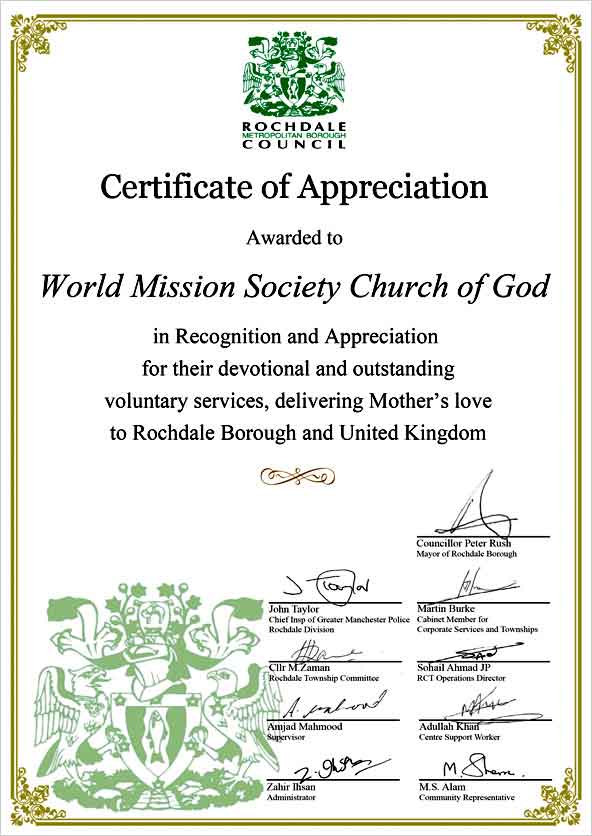 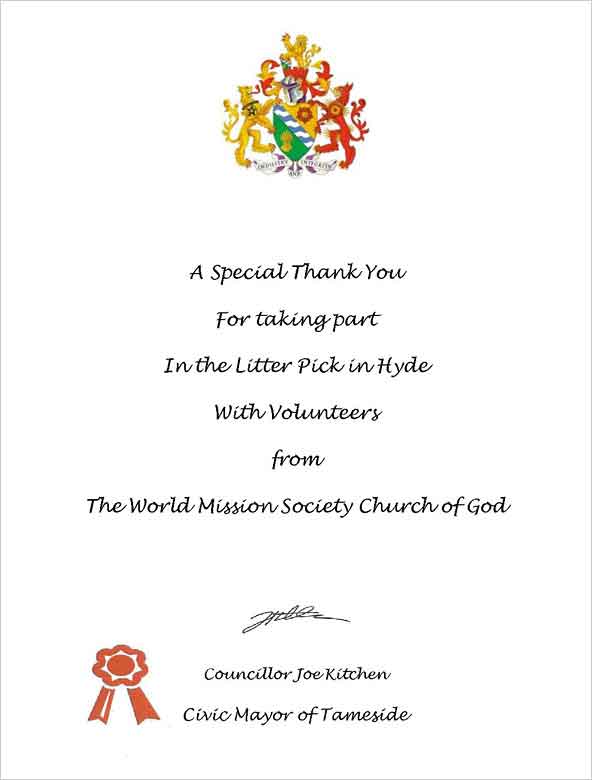 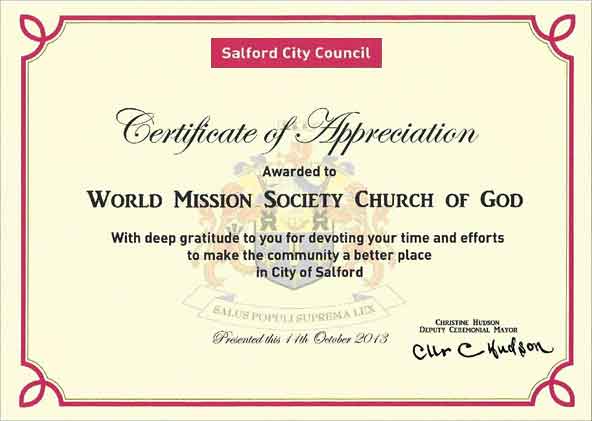 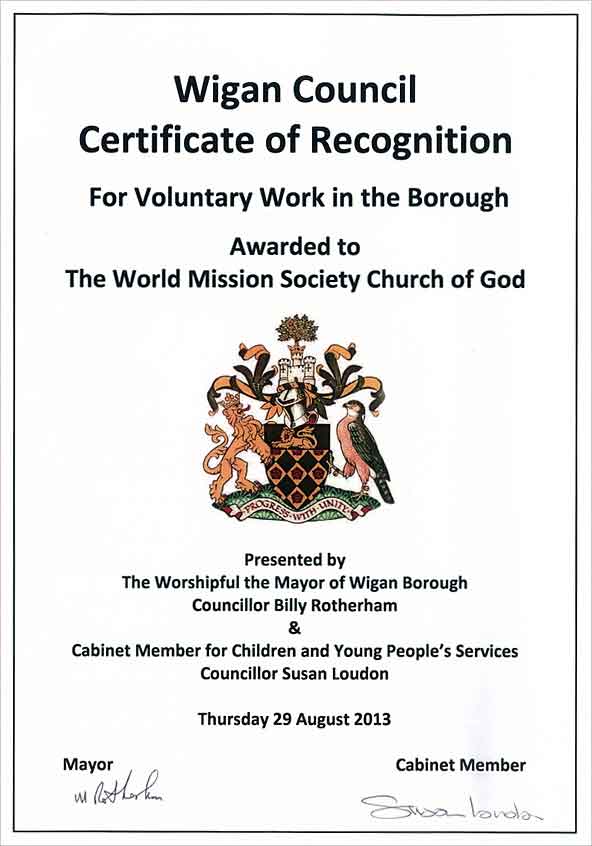 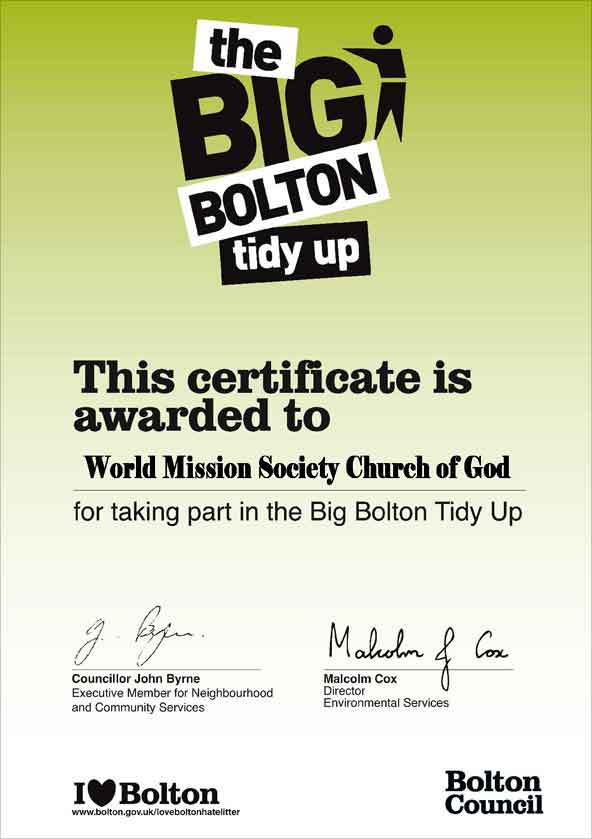 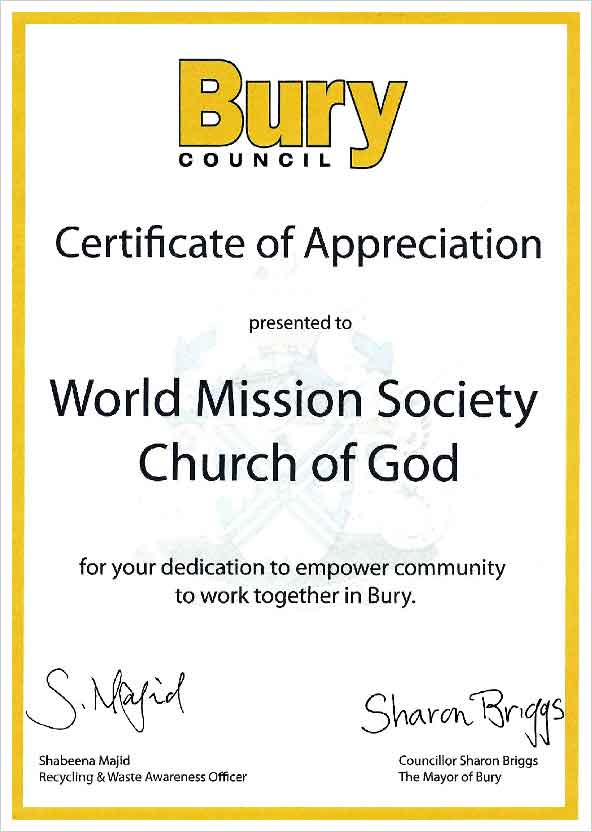 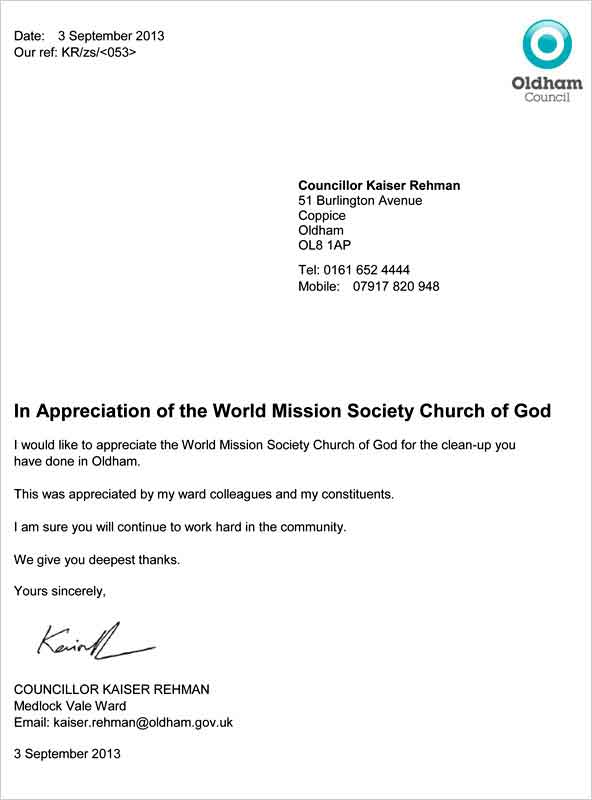 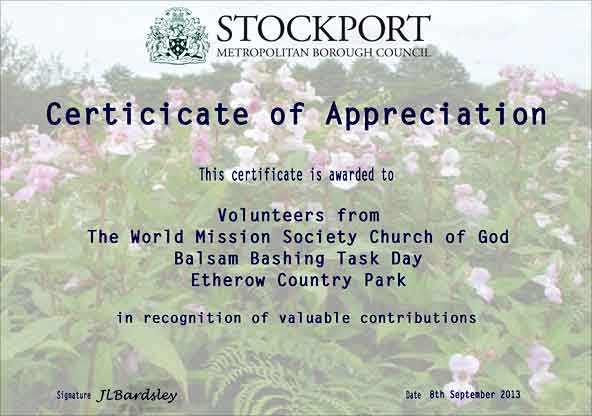 “Since I’ve been mayor, I don’t believe that we give any awards to any churches. There’s no question about your doing a good job. I think it should be acknowledged. I believe the whole world will grind to a halt if it wasn’t for volunteers. Each of you must be very proud of yourselves. You’ve done a really good job.”

Billy Rotherham The Then Mayor of Wigan